The “bin-picking solution” system removes parts from a storage box and passes them on to the next machining or packaging process. It consists of:
• An igus robolink robot arm with control system for handling components. Linear robots or delta robots can also be used.
• A sensor for generating a 3D image of the part in the storage box
• Analysis software for generating a gripping position from the 3D image
• A safety PLC with door and position switches
• A robot cell made of aluminium profiles
A user inserts a box full of parts such as injection moulded parts or medication boxes. He starts the process, and the robot now clears out the box in a fully automated process. The process has four steps:
1. The sensor generates a 3D image of the parts in the box, a so-called point cloud. It makes the part surfaces visible.
2. The analysis software recognises the parts in the point cloud. It can do this based on flat surfaces or CAD data.
3. A part to be gripped – usually the topmost – is automatically selected. The best gripping point is calculated for this part and sent to the robot control system.
4. The robot grips the part and deposits it in a transfer position. As soon as the robot arm leaves the space above the box, the next iteration begins.
The parts to be gripped can be taught either as cuboids of defined side length or as a CAD file. The parts are gripped by means of a vacuum cup or a normal gripper. 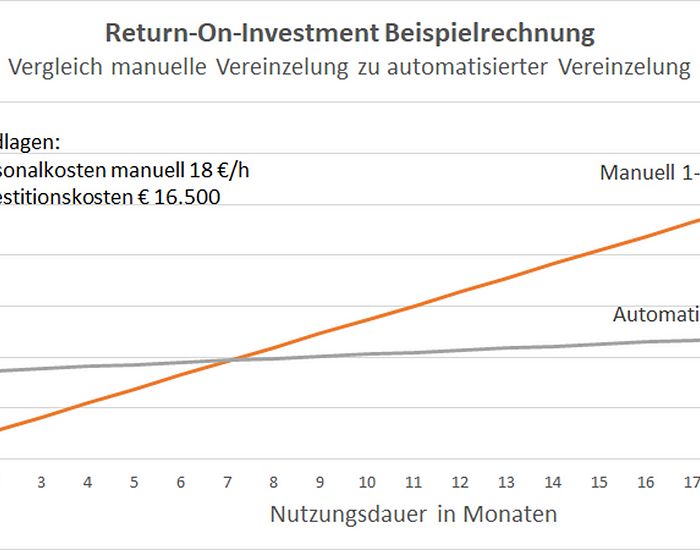 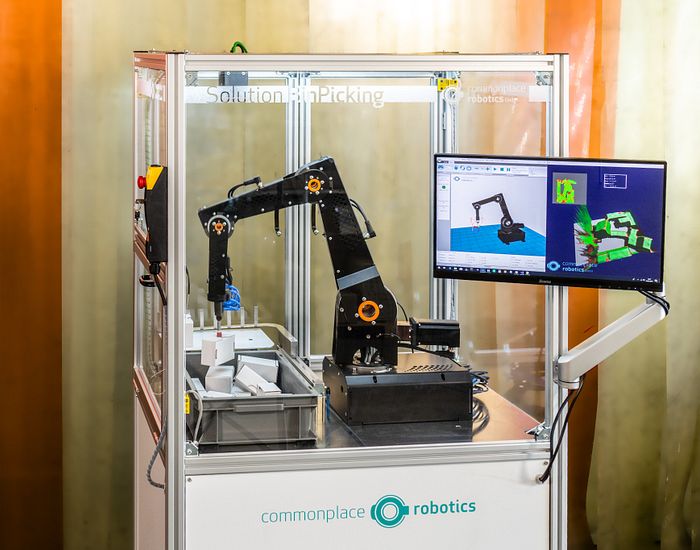 Problem:
So-called “bin-picking” is the removal of individual workpieces from a box. Parts are stored or transported in a box and must then be separated for the next processing step. Examples include the following:
• Injection-moulded parts
To minimise set-up times, injection-moulded parts are usually manufactured in large batches to be used from stock. They are often stored in boxes until needed. They must then be removed from the box and fed to the next process step, such as assembly, milling or packaging. The parts must be separated and must generally be fed in a familiar orientation.
• Medication boxes
Pharmacies receive their medication deliveries in transport boxes in which medications arrives in various packaging. To store the medications at the pharmacy, they must be removed individually.
• Online trade warehouse logistics
To commission online orders, individual products must be removed from storage containers and deposited in the order container.
• There are similar scenarios for sheet metal parts, turned and milled parts, and injection moulded and forged parts in logistics and many other areas.
These examples show how frequently bin-picking is encountered.
There are many solutions for the task, including the following:
• Manual: an employee manually removes parts from the box. This solution is very flexible with high running costs.
• Mechanical conveyor: depending on the component, spiral conveyors or similar systems can be used to separate parts. A solution that has been set up can only be used for a specific part.
• Automated removal: an image-processing system determines the position of the part that can best be gripped and a robot removes that part. This solution is very flexible with low running costs.
The system described here implements the third solution approach.

Solution:
The system’s advantages are in four areas:
• Minimal running costs: only material boxes must be fed in; thereafter the system works without manual intervention.
• High flexibility: new workpieces are simple to teach, so switching between variants and workpieces is easy.
• Low investment costs: robot, control system and analysis software are all low-cost components. Below is a sample list of investment costs.
• Fast commissioning: graphical user interfaces with a low initial hurdle allow quick adjustment to new tasks. New components and new robot programmes can be learned quickly.
The Low Cost Automation approach encompasses not only investment costs, but also simple system commissioning and programming. The user-friendly programming interface allows this work to be done in-house.
Investment costs for a simple bin-picking system with a linear robot start at about €16,500 for the components named above, with some variation upwards and downwards depending on the application. The savings over manual part removal mean return on investment in single-shift operations after about seven months. ROI times are greatly reduced in two or three-shift operations.