diondo CT system with an igus dryve control system for exploring the seabed.

At the behest of a Chinese university, diondo GmbH developed and built an industrial computed tomography system to test drill cores. What is special about this system is that it is designed for installation on a research vessel. The challenges of maritime conditions are very different from those in a comfortable laboratory. Swells, saline atmosphere and high humidity are tough environmental conditions, especially for the system’s electronics and mechanics. The drill cores, which are to be analysed in a non-destructive manner in future, are up to 2m long, and their maximum diameter is about 50mm. The Chinese scientists hope to use the CT results to research the structure of the seabed’s sedimentary rock. They are especially interested in the incidence of so-called gas hydrates or crystalline solids in which various gases have been enclosed. The high pressures and low temperatures on the seabed have allowed the gas molecules to be trapped in a web of water molecules. Given the approaching exhaustion of conventional fossil fuels, methane gas hydrates are a promising potential future energy source. But gas hydrates also stabilise the seabed. There is danger of the gas hydrate layer destabilising – as a result of climate-induced ocean warming and of uncontrolled extraction of the fuel. This could result in seabed slides, especially in sloping areas. In the worst case, such slides could trigger massive tidal waves. That is why the incidence of gas hydrates must be evaluated, the structure of the sediments analysed, and mechanisms of hydrate formation, deposit and transport better understood. The industrial computed tomography represents the decisive process for answering these questions, which are so important to our future. 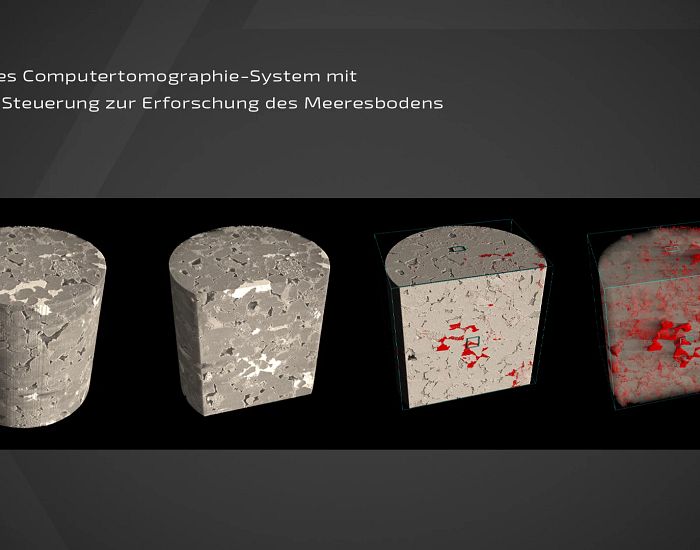 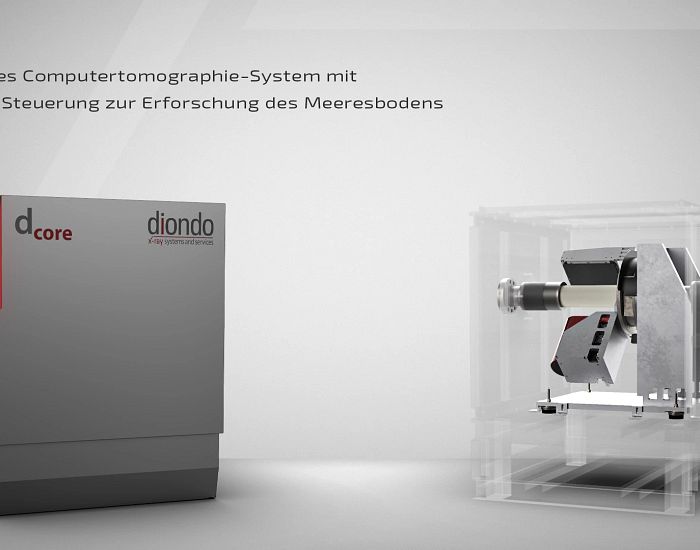 Problem:
In addition to the harsh maritime environmental conditions, the longitudinal geometry of the drill cores were a special design challenge for the CT system, given the scarcity of space on board the research vessel. A completely new system concept was therefore developed based on the university’s requirements. In the system’s interior, X-ray sources and X-ray detectors are guided around the drill core in a rotational movement. Normally, the sample is clamped into a manipulator in the industrial CT and rotated, but this is not possible in this case for the reasons outlined above. A comparable principle is already being used in medical computed tomography. In order to reliably represent the finest structures in the sedimentary rock, the system must also allow a resolution of 25µm during analysis. Combined with very limited funding from the public research institute in China, our developers had to weigh the best possible technical performance against acceptable financial outlays.

Solution:
The igus dryve control system was used for the first time to automate the CT system’s manipulator. The outstanding price-performance ratio, the robustness, and the easy integration into the existing system concept were decisive selection criteria. We have had such good experience with the system that we have decided to use igus control systems in future CT systems.
Computed tomography’s capability of representing the rock’s interior structure in the drill cores, including in three dimensions, gives the system a unique advantage over two-dimensional polished particulate solutions and greatly increases throughput and efficiency. Ultimately, three-dimensional CT data is very important input values for later flow simulations for hydrate transport processes in the sedimentary rock.