About us:
SUPERWURM is a family-managed company. We raise earthworms for fishing, gardening and feed. We sell them in our own shop on the internet. SUPERWURM was founded in 2000, and we started out in our family garage. In 2003, we moved to a new company headquarters in the Düren Industrial Park. We now have three halls with a total space of 1,200m². In order to raise earthworms economically in Germany, SUPERWURM has invested in automation. Component robustness and cost play a critical role. This led us to use igus components in various applications early on.

System application description:
The globally accepted practice is to count out earthworms by hand and then pack them in boxes. They are then bought by fishermen and others. Our innovative approach consists of construction of a WoPi (Worm Picker) system that counts worms automatically and puts them in boxes.
Worms are fed onto a conveyor belt (currently just a board, since Corona prevented component delivery). Image recognition detects earthworms present on the conveyor belt. An igus linear robot grips and deposits the earthworms. A robolink robot arm puts them in boxes. The arm takes a box from a box dispenser (not yet mounted), moves it to the deposit point, and transfers the finished box to a transfer point. From there, the box travels to packaging/shipping. Software we developed ourselves controls the system. The computer we use is a Beckhoff touchscreen PC. The system counts the specified number of earthworms in the boxes. 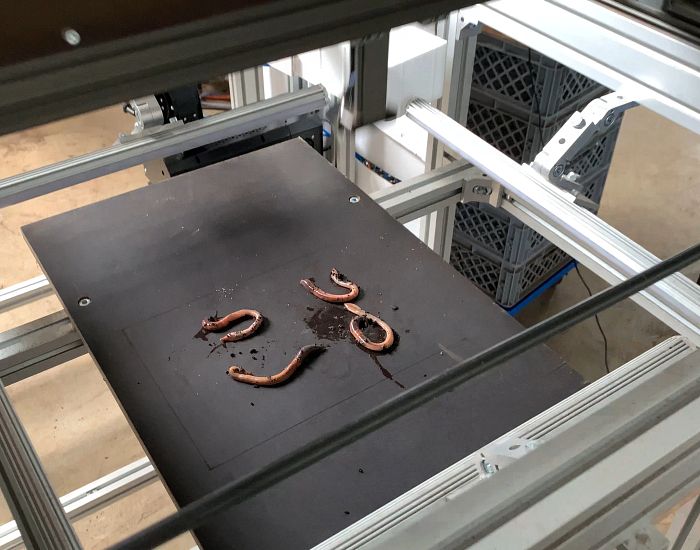 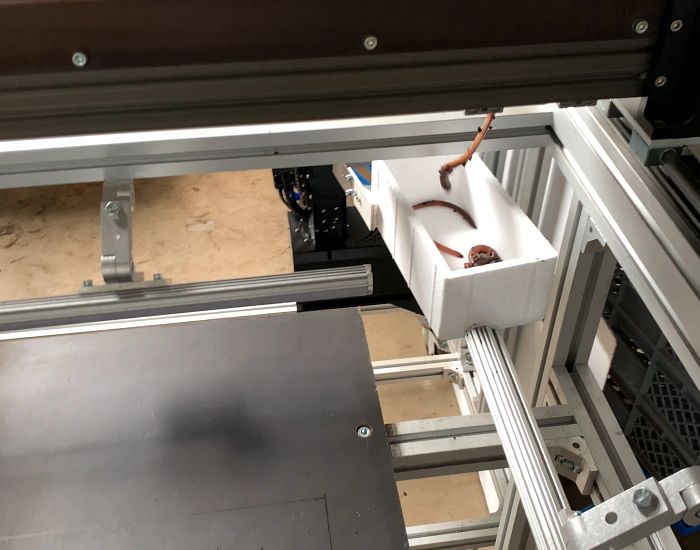 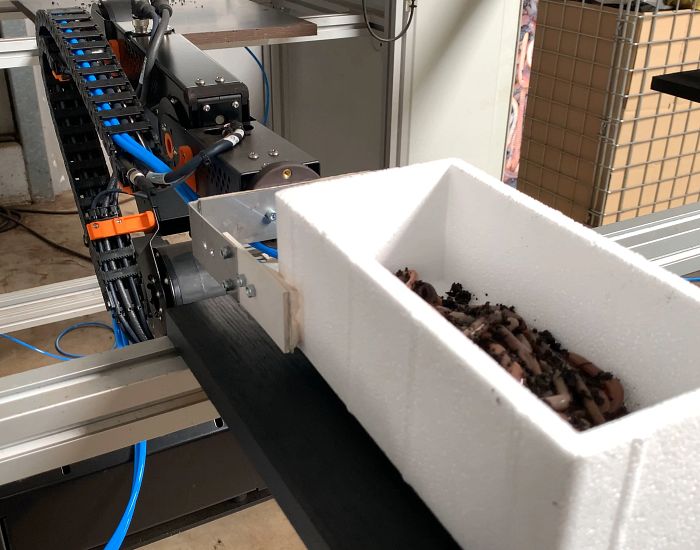 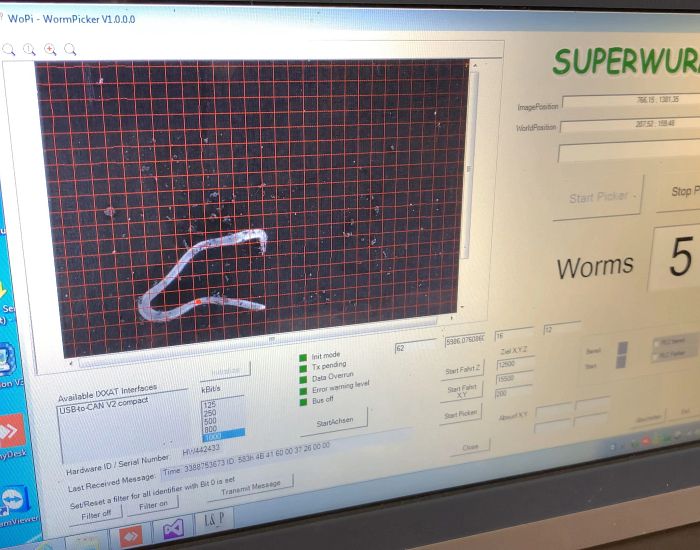 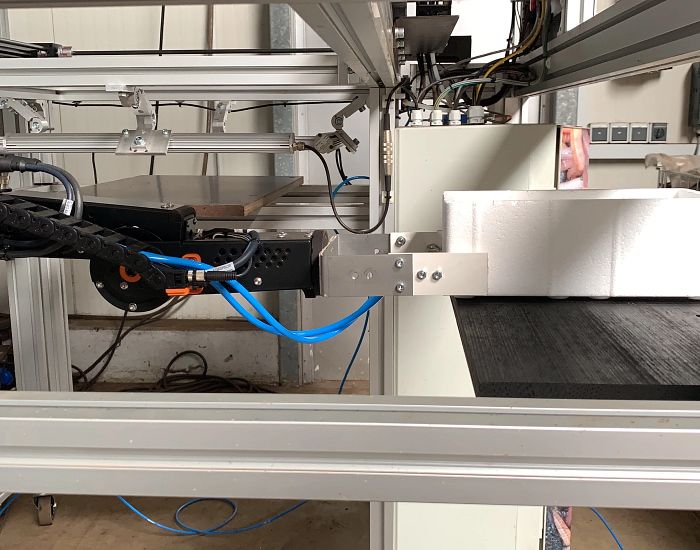 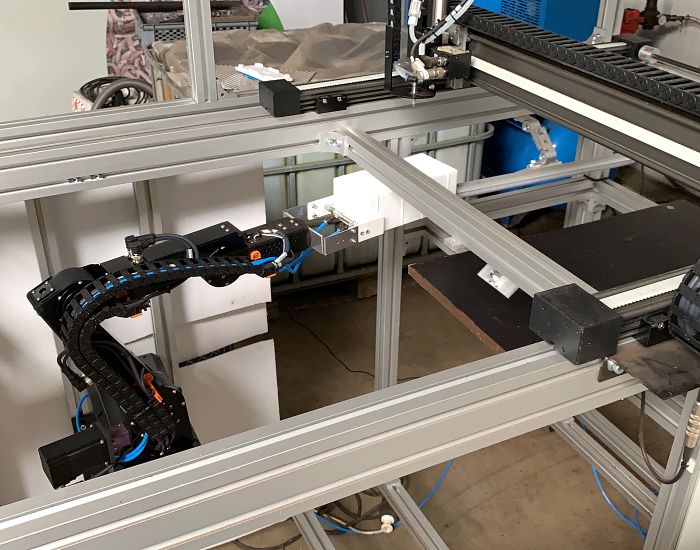 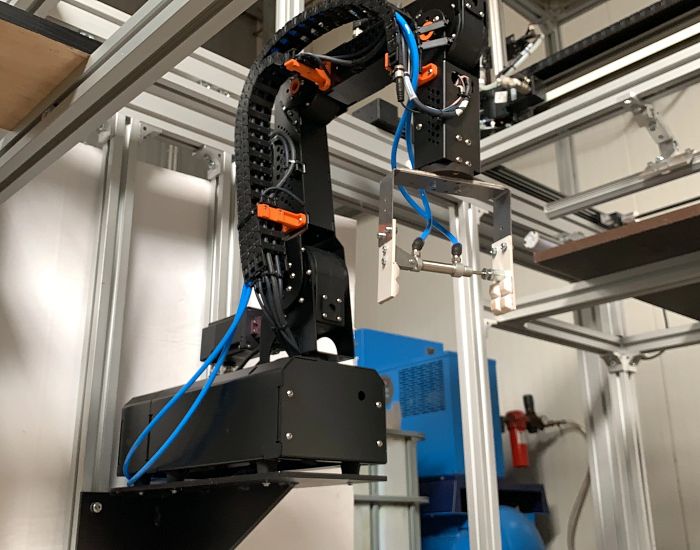 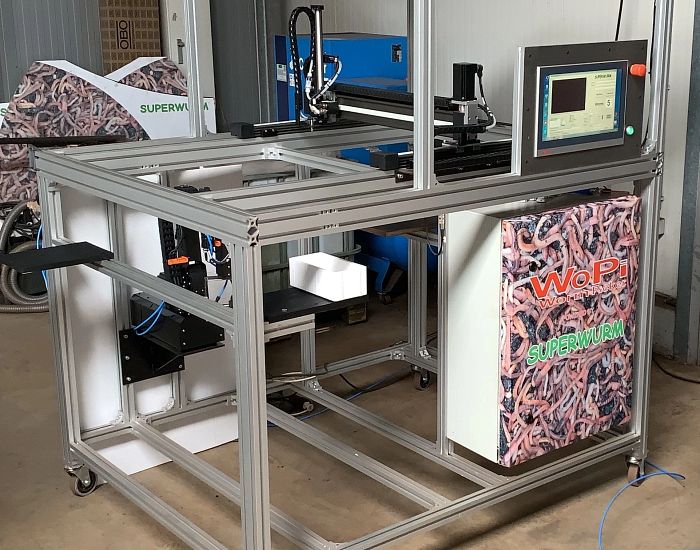 There are a wide variety of problems. The system must be as compact as possible, easy to operate, reliable, robust and affordable.
Our first challenges were image recognition for earthworms, worm gripping and worm transport to the dropping point. We chose an igus flat linear robot for gripping (vacuum cup). igus technologies had already proven robust (in dirty environments) in other applications. They work precisely and cost-effectively.
The second challenge was box feed to the drop point and box discharge at the transfer point. The system is compact enough to limit installation space for feed. The original idea was a painstaking, complex design for removing a box from the box dispenser, feeding it and transporting it away after filling. Implementation failure delayed system refinement. The successful solution uses a robolink robot arm, which can move elegantly in the limited installation space and replaces a complex mechanism. This allows the system to be completed in a manner that meets the requirements.

There is no system like the WoPi on the market as yet. To make the system significantly better than a purely manual approach, it must be either extremely fast or affordable and sufficiently fast. There are no extremely fast, low-cost solutions. There are also speed limitations for gripping worms and transporting away filled boxes. The primary components, such as the igus linear robot and the robolink robot arm, are sufficiently fast, but remain in the low-cost range. This makes the system economically attractive. It can be used in multi-shift operations. In our experience, one person can count an average of about 3,000 earthworms per hour for four to six hours a day with breaks. The system manages about 1,000 earthworms per hour, but can work multi-shift operations without breaks. Packing plants are increasingly struggling to find personnel, which makes an automated system even more attractive. If not enough employees are available, orders often go unfilled.