In March 2011 the Fukushima nuclear power stations were severely damaged by the Tōhoku earthquake and tsunami. Three nuclear reactors were without suitable cooling and underwent a catastrophic meltdown. The clean-up and decommissioning has required thousands of scientists across the world to invent, develop and deliver new or improved techniques. Part of the planned decommission process requires the molten nuclear fuel to be removed. However, there is currently very little knowledge about the location and makeup of the fuel debris. The high radiation environments within the reactor buildings have made optical camera systems inoperable. A promising method of visualising and characterising the fuel debris is to use acoustic imaging sonar systems within the reactor buildings. This is because sonar systems are very tolerant to radiation and offer the ability to not only image the shape of fuel debris but also to look inside it. A decommissioning programme can only be advanced once the full nature of the fuel debris is known.
There therefore existed a need for a large scanning system which would allow us to position sonar probes and image simulated uranium fuel debris, nuclear reactor core components and nuclear grade pipework (shown in detail in one of the attached images). This scanning system, which employs the drylin bearings, will allow us to develop new imaging methodologies of nuclear fuel in a safe and adaptable environment. 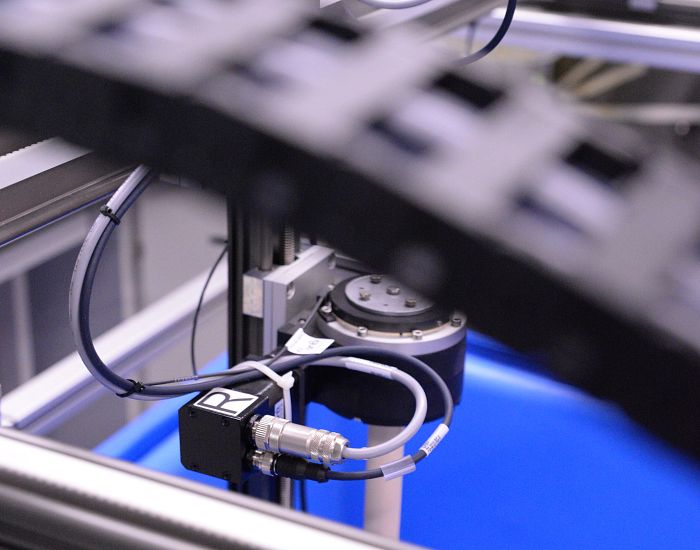 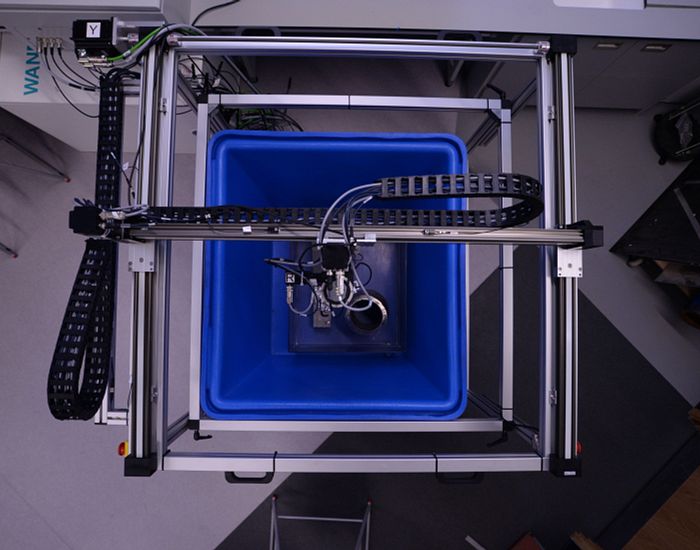 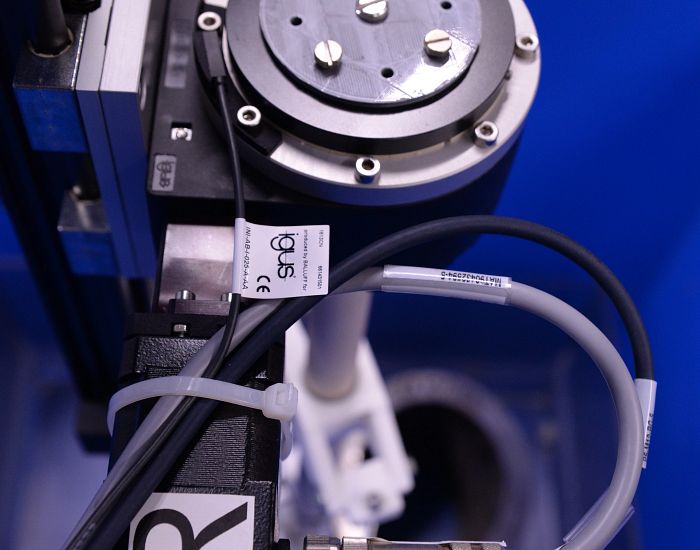 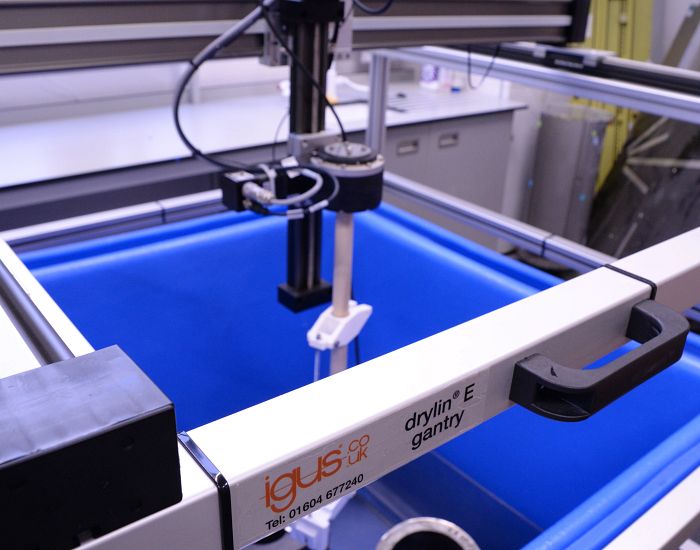 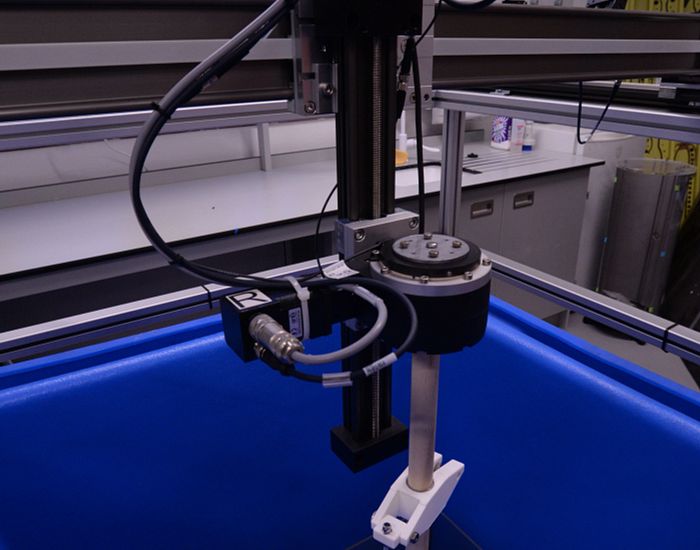 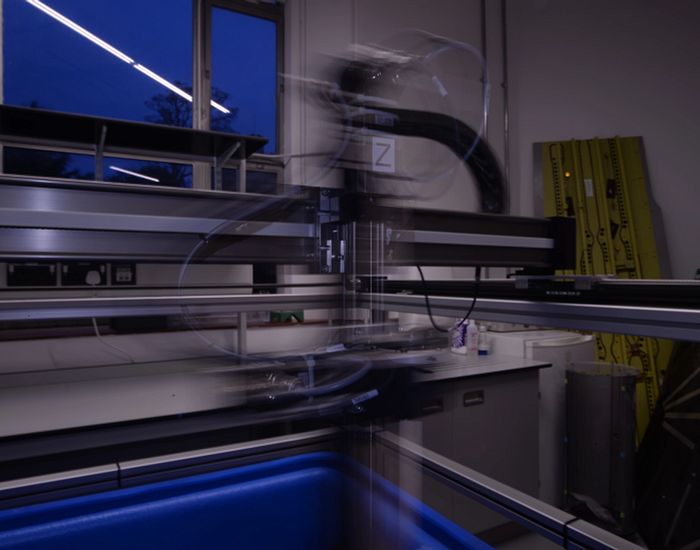 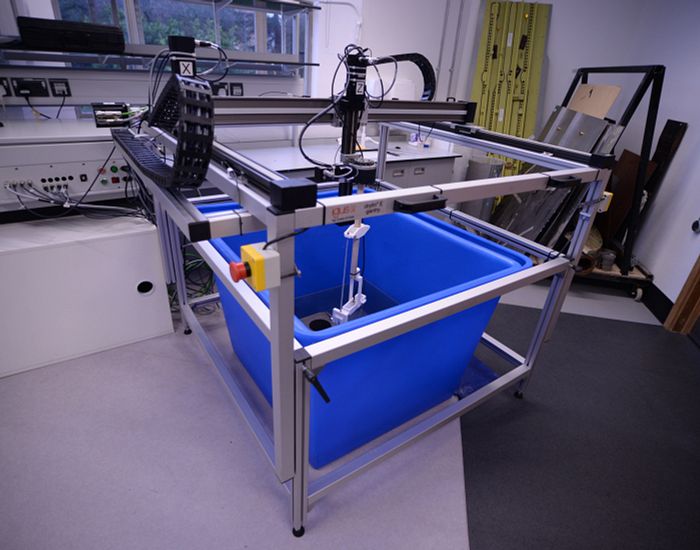 Problem:
During the commission stages of the gantry system we identified a number of critical aspects of its performance (in collaboration with Adam Sanjurgo at igus UK) which needed to be met. Among these were; (1) A modular system which could be adapted as the nature of the situation in Fukushima changed. Importantly, we needed to be able to add additional motors and guides. (2) The system had to be quiet while in operation due to the sensitive nature of work conducted within the laboratory where the scanning system is situated. (3) The whole system needed to be clean so as not to contaminate any of our highly sensitive (and expensive!) equipment. (4) Maintenance needed to be as simple as possible without compromising performance. (5) The system needed to achieve accurate positioning of our measuring instruments to within a millimetre as ultrasonic measurements rely on accurate distance measurement. (6) The whole system needed to be affordable and complimented by good support from the manufacturer as scanning systems are not our area of expertise. (7) The gantry system needed to fit into a small space and cable management needed to be simple to use. Easily adaptable cable management was also very important as sensors will be added and removed regularly. (8) The control system had to be designed and implemented by us. We have some very specific motion control requirements and we wanted to create this in-house.
Once we identified the specifications for the gantry we worked with Adam Sanjurgo to outline the whole system. The solution provided to us by igus included the very robust gantry frame, the e-chain cable management system, drylin bearings, stepper motors, proximity switches and all cabling needed.
Having had the whole system operational for about 3 months each of or requirements has been met or exceeded. We are very happy with the system’s performance and it has already started to generate very useful data. Additionally, working with and modifying the whole system has been very easy, which for us as novices in motion control was very important.

Solution:
Our initial requirement for the scanning system was for a large translation distance in x and y directions. However quite early on in the commissioning process Adam Sanjurgo pointed out that the modular nature of the drylin system would allow us to expand on this considerably by adding an additional z axis unit as well as a rotational degree of freedom. The flexibility and modular nature of the scanning system meant that adding two additional axes of movement (in our case a robolink unit for rotation and a SAW linear axis for z movement) were very straightforward and did not affect operability due to the high load bearing capacity of the x and y stages.
We have had some experience with traditional ball bearing scanning systems and were always having issues with properly lubricating them. There were many times when the systems were either under or over lubricated. The knock-on effect was either noisy operation or the accumulation of excess dirt and grease. The noisy operation was a particularly troublesome issue seeing as we are working in an acoustics laboratory. Previous systems were known to run so loudly (for an acoustics laboratory even what is quiet for a human is not quiet for our instruments) that they had to be operated out of hours. The dirt of previous systems was also a concern as many of our instruments (such a microphones and optical systems) are sensitive and easily damaged by even a stray fingerprint, let alone lubricating oils.
During our research into a quiet system we were directed towards the drylin systems from igus. We had an opportunity to discuss the merits of linear bearings from igus with a past customer who not only recommended drylin bearings but also igus for the customer service, which thus far we have found to be very good indeed.
Having decided to commission a large scanning system we were very keen to test it and assess its performance characteristics. Our principle concerns were operating noise and stability during movement; thus far both have exceeded our requirements. The system is so quiet in fact that it can operate during the day without others being aware of its operation and thus far we have not reported any disturbance to our measurements within our laboratory.