Laboratory-based experimental systems play a critical role in population biology, community ecology, and evolutionary biology. Such systems use model organisms – which typically reproduce rapidly and pose few ethical issues – to generate data to test and develop models and theory in arenas which provide analogues of real systems. One of the most well-established uses single-celled freshwater protists which can be assembled in communities of competitors, predators and parasites. This system has been used for over 100 years to test fundamental ecological theory and processes, and recently has provided data to develop methods to help predict the loss of populations, a key goal for conservation prioritisation given current extinction rates. 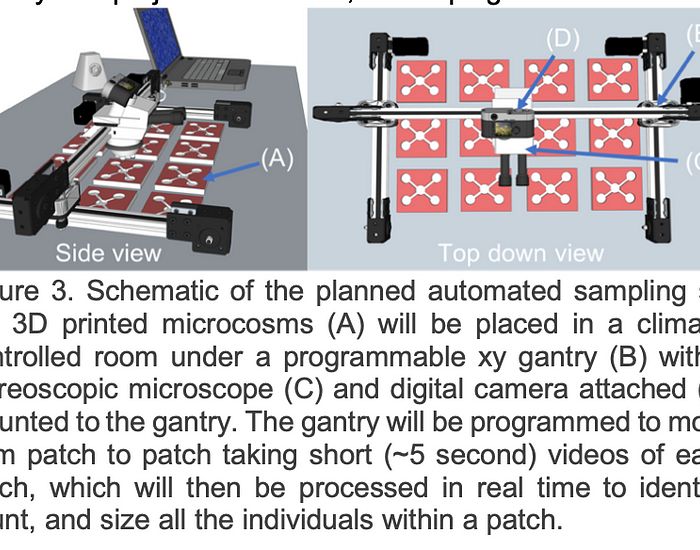 Problem:
However, for the majority of this time collecting data from the protist microcosm system has relied on manual labour, whilst the habitats in which the experiments are carried out (typically petri dishes) fail to reflect the spatial complexity of natural systems, limiting the type of data and scope of the questions which can be tackled. We are employing an igus gantry to automatically move a microscope and attached camera across 3D printed experimental arenas. Doing so allows us to collect videos which can be analysed using AI to generate data on the abundances, body sizes, behaviours, and locations of multiple interacting species in spatially complex landscapes to be assessed at resolutions far exceeding what is currently possible. This set up will be used to test and develop models which can be used to predict what species are at most risk of extinction in the real world and help prioritise conservation effort and funding.

Solution:
Automating the data collection in these systems means we have data at far higher temporal resolutions than was previously possible, and also data which is far more accurate. Moreover, we can do this without having to move the experimental systems which disturbs the organisms and potentially changes how they behave.