Vetrotech Saint-Gobain Kinon GmbH has been manufacturing safety glass for public institutions and marine applications since 1980. In addition to bulletproof and explosion-proof glass, the company manufactures fire-resistant glass. To make production even faster and more reliable, the company now uses robot technology. For example, an igus delta robot is used to sort bulk goods on predefined pallets. The retrofit pays off in two ways: it gives employees relief and greatly reduces costs. Following a successful test phase in Germany, all five company sites will now use the modern automation technology. 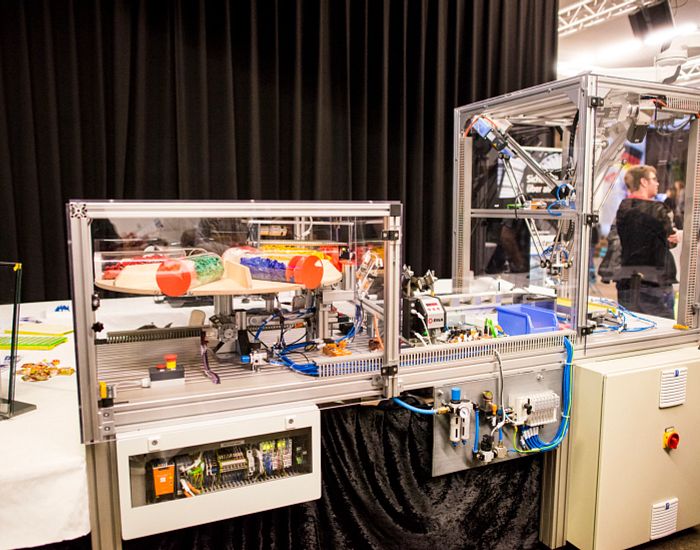 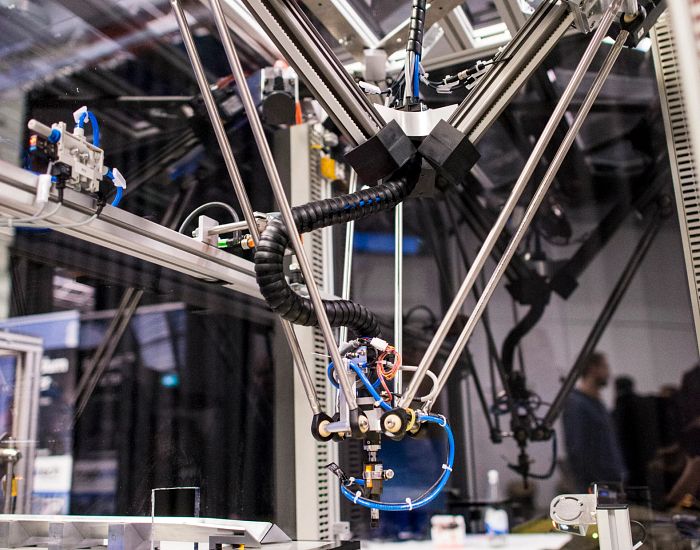 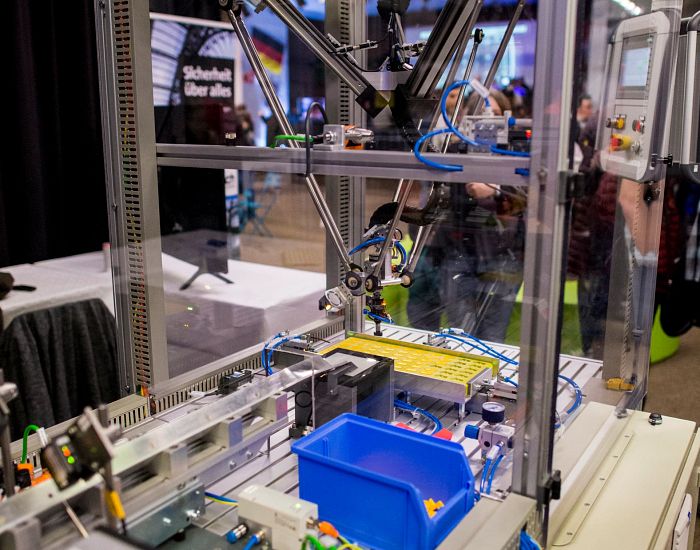 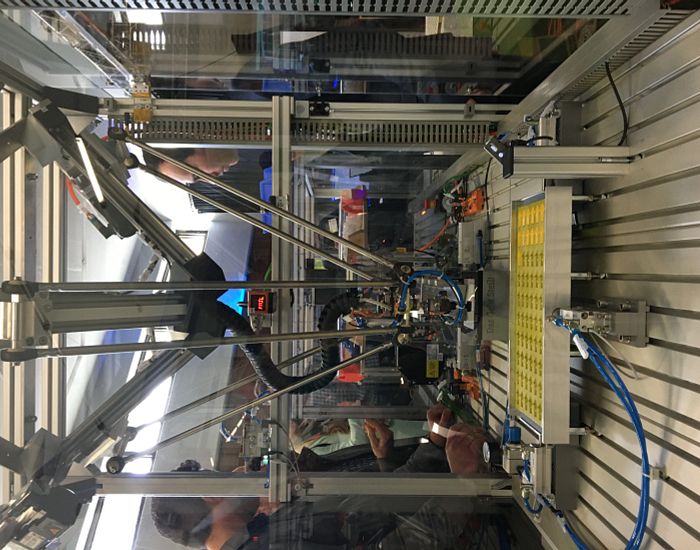 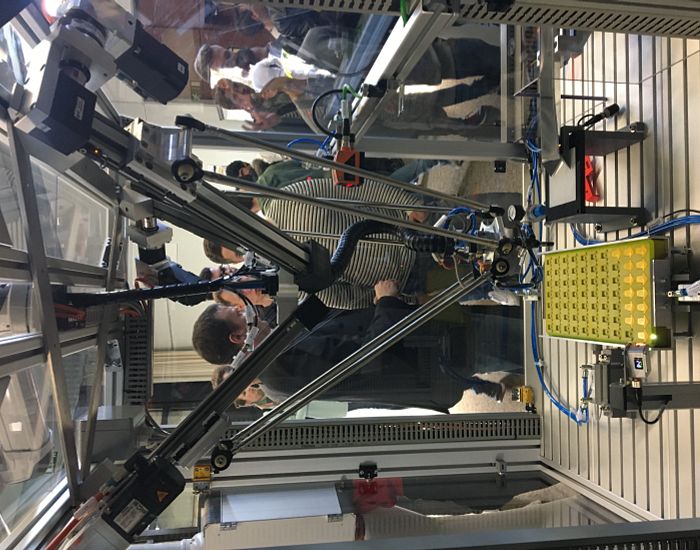 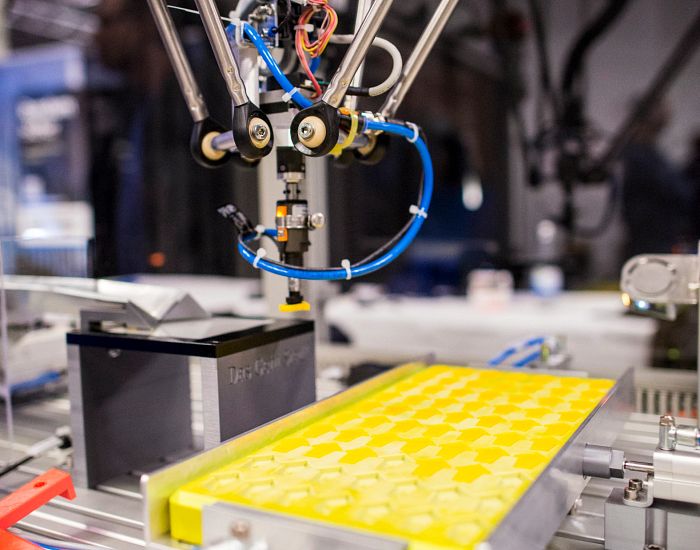 The Saint-Gobain company dates back to 1665. King Louis XIV of France granted financier Nicolas Dunoyer and his partners exclusive manufacturing rights for mirror glass – with the aim of breaking the Republic of Venice’s monopoly on Europe’s mirror market. The main production facility was located in Saint-Gobain, a small village of the same name in Normandy. The manufacturing orders were impressive. For example, the Saint-Gobain mirrors have been adorning the gallery of the Royal Palace of Versailles near Paris since 1684. Around 300 years later, the glass specialist entered the market for fire protection glass together with Vetrotech, a leading international supplier of high-tech glass with decades of experience. The objective was to use reliable process automation with a fast ROI in production in order to remain competitive in the market.

Special liquid provides fire protection
Vetrotech Saint-Gobain is a specialist when it comes to structural glass, including fire protection,
heat insulation, soundproofing, and safety glass. Fire protection glass is an obstacle to fire and prevents further spread for a certain period of time. Conventional glass cannot do this because heat causes it to shatter. Production of fire protection glass requires special glass with cavities that offer insulation protection in the event of fire. The multilayer glass is encased in a compound. Before that, however, a liquid must be filled between the glass panes.

Monotonous method of positioning spacer pieces on pre-defined pallets.
To fill the glass panes with the liquid, the design engineers use filling corners in the shape of arrows as placeholders through which the liquid enters the space between panes via a flexible tube. The arrows are placed in the spacer before the panes are pressed. The corners are pulled out again for the filling process. They cut out the spacer on the bottom side cleanly with their cutting edges, so that the tube can be inserted there. The liquid passes through the tube into the pane, which becomes clear after a curing process. As soon as the pane is filled, the tube is removed and the opening closed and sealed. The cured mass provides protection in case of fire. The production process has so far been as follows: first, the plastic arrows were placed in predefined moulds, then picked up by a robot and positioned as placeholders to allow the liquid to enter the cavity. The insertion of the arrows into the moulds was previously done by hand. An employee performed this monotonous work as an extra task. Simple as it was, it was nevertheless an additional load, so a new solution had to be found that relieves the employee, is cost-effective, and achieves reliable results. Daniel Fahnenstich, Niklas Kuhl, and Daniel Voth took on this task as part of their technical training at Vetrotech Saint-Gobain.

The igus delta robot wins over customers with its simple implementation.
In their search for a suitable automation solution, the project team encountered the igus delta robot at the Hannover Trade Show, where the motion plastics specialist was exhibiting its machine. The low-cost automation solution is ideally suited to simple implementation of the project. The robot is based on three maintenance-free drylin ZLW toothed belt axes, lubrication-free igubal coupling joints and matching adapter plates. NEMA stepper motors and encoders ensure the quick handling of up to five kilogrammes with a precision of ± 0.5 millimetres. The complete system has a working area diameter of 660 millimetres. The delta robot’s lightweight aluminium and plastic construction makes it extremely cost-effective (less than €5,000) and ensures high speeds (pick rates of at least 30 per minute). “The cost-effective delta robot gives our customers their own control box and integration at a cost of around €10,000 to €15,000. It pays for itself in less than six months”, says Stefan Niermann, Head of the drylin linear and drive technology division at igus GmbH.
Together with igus Low Cost Automation experts, the project team developed the pick & place solution for the automated placement of arrows on predefined pallets. No sooner said than done: the delta robot was installed.

Improved work quality with a short payback period
The automation solution relieves employees while accelerating production processes. Employees to use their freed capacities for more demanding activities. The improved quality of work was not the only incentive to automate. The low cost robot pays off, as its quick ROI shows. “Given three shifts per day, if one employee sorts the filling corners for three hours, the project will pay for itself in twelve months given current costs”, says Niklas Kuhl.

Quick set-up time conversion to robot technology
Saint-Gobain Vetrotech already has plans to optimise its production process so that the filling corner sorting system will be completely automated, from filling to removal. The company has five other sites worldwide with the same application. Conversion to robot technology is already planned for them too. “If we had to build the system again now, we would just order the delta robot, start the motors, use the tripod kinematics, enter the values we already have, and the system would be ready to go. If we have all the components, we can assemble that system in a single day”, says Kuhl. The company had even converted the delta robot so that some of its components were from Siemens; the igus stepper motors and the D1 dryve control system were replaced by Siemens servo motors and Siemens servo controllers to ensure perfect control by the Siemens S7 1511T control system. For this purpose, the company uses the Siemens TIA Portal V15.1 and the control system’s technological functions for programming and calculating kinematics.

Depending on the customer’s requirements, the new delta robot can be delivered within 24 hours as a pre-assembled construction kit, including assembly instructions, in a box or as a ready-to-install system in a transport frame. The customer has the option of using their own software and control system or the intuitive, easy-to-use igus Robot Control or dryve control system. The delta robot is very well-suited for simple assembly and pick & place tasks and inspection technology applications. In addition to the delta robot, igus offers other Low Cost Robotics systems in its robolink product range.