Application description of the installation

To create a physical model of a car body, workers apply heated clay to the model frame. The roughly shaped clay model then goes through two milling stages. In the first stage, a 7-axis robotic milling centre mills the model with an offset of about 5 mm. The second stage is the fine milling of the model to its final shape.

In order to speed up production, we want to skip the first stage by controlling the amount of clay that is applied to the model. For this purpose, an additional 6 DoF robot is used, which controls the thickness of the clay by scanning it with a 3D linear profiler. After a comparison between the scanned model and the CAD model, the problem area (with too much or too little clay) is marked with a colour projection. These areas can be treated accordingly by the worker.

This application is part of the Aurora project, which is a sub-project that has indirectly received funding from the European Union’s H2020 research and innovation programme through a call for tenders launched and implemented under the TRINITY project (grant agreement No 825196).

In order to provide a safe environment for workers, the robot used for ah-hoc quality control must be a collaborative robot. In this application, we have selected Universal UR10e robots with a reach of 1.3 m. As typical cars are about 5 m long, we had to upgrade the robot’s reach by introducing an additional 7th linear axis.

The Igus drylin 7th axis robot slide for UR robots provides a simple solution with easy integration. With 3000 mm of travel, the reach of the UR10e robot increased to over 5.5 m and was sufficient to cover the entire area of the car.

By simultaneously controlling the thickness of the clay applied to the model, we can ensure that the physical model is sufficiently matched to the CAD model. This will reduce clay consumption by approximately 20%. With better matching, we will also be able to skip the first stage of rough milling, which will allow faster production and lower resource consumption.

How did you hear about the ROIBOT competition? 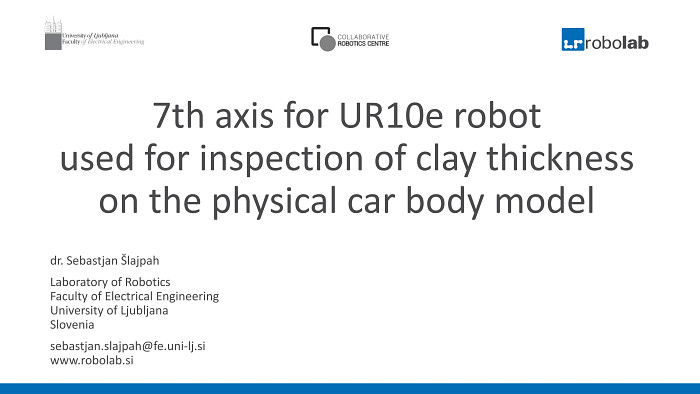