MANUS 2019-02-22 19:25:47
The ability of aerial manipulation robots – drones equipped with robotic arms – to reach easily and quickly remote or high altitude workspaces results of interest for applications related with inspection and maintenance in scenarios like oil and gas refineries, chemical plants, wind turbines, solar plants, or power lines. The operation conducted by an aerial manipulator usually involves some kind of physical interaction with the environment, for example in the execution of grasping tasks, or during the application of contact forces. The estimation and control of the interaction wrenches exerted over the aerial platform in situations like these is necessary to prevent that the stability of the control system is compromised, reducing the risk of collisions and crashes. The design and development of compliant joint manipulators also aims to increase safety during the interactions on flight, exploiting the energy storage capacity and the passivity properties of springs in order to protect the aerial robot against impacts and overloads.

Unlike most industrial manipulators that integrate expensive force-torque sensors in the joints or at the end effector, the servo actuators typically employed for building lightweight robotic arms for aerial manipulation do not provide a direct measurement of the torque, or this is based on the current so its accuracy is low due to the static friction of the gearbox. This motivated the development of methods for estimating the forces and torques from the measurement of the deflection in the elastic element, either at joint level or in the Cartesian space. Despite the evident benefits of the mechanical compliance during the physical interactions of the aerial robot while flying, the main drawback of these mechanisms is the reduction in the positioning accuracy due to the deflection of the joints or links, introducing a second order dynamics associated to the of mass-spring-damper system.

The aerial manipulator presented in this competition, shown in Figure 1 (see attached document), consists of two components: a DJI F550 hexarotor platform, and the Cartesian manipulator, depicted in Figure 2, whose main specifications are summarized in Table 1. The 2-DOF Cartesian manipulator is built from two igus® NS-01-17-600 (X-axis) and NS-01-17-300 (Y-axis) linear guide systems, and three NW-02-17 carriages. Two 22 mm Ø timing pulleys are placed at the tip of both linear guides to transmit the motion from the Pololu micro metal gear motor (10 grams weight, 250:1 reduction ratio) to the timing belts, measuring the rotation with two side-by-side Murata SV-01A potentiometers. Note that this device has an electric range of 333°, requiring a second potentiometer to cover the dead zone. Given the rotation angle and number of turns, it is possible to compute the linear displacement of the Cartesian base. This is attached at the base of the hexarotor through of two U-shaped aluminum frames separated 10 cm, whereas the compliant joint arm is attached to the carriage of the Y-axis linear guide structure. The compliant arm employs a Herkulex DRS-0101 servo, a compact spring-lever transmission mechanism supported by a JFM-08-06-04 flange bearing, a magnetic encoder AS5048 for measuring the deflection (0.2° accuracy), a 250 mm length aluminium link inserted in a EFOM-06, and a sliding gripper at the tip supported by two ECLM-06 SLIM bearings and two extension springs. The linear deflection of the gripper, which is related with the pulling force through, is measured with a linear potentiometer. The mass and inertia of the links of the prototype are indicated in Table 2, indicating in Figure 2 the reference axes and center of mass. 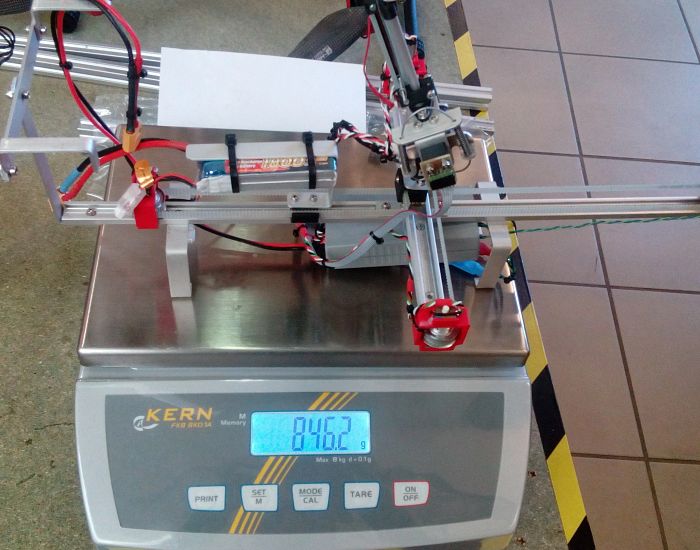 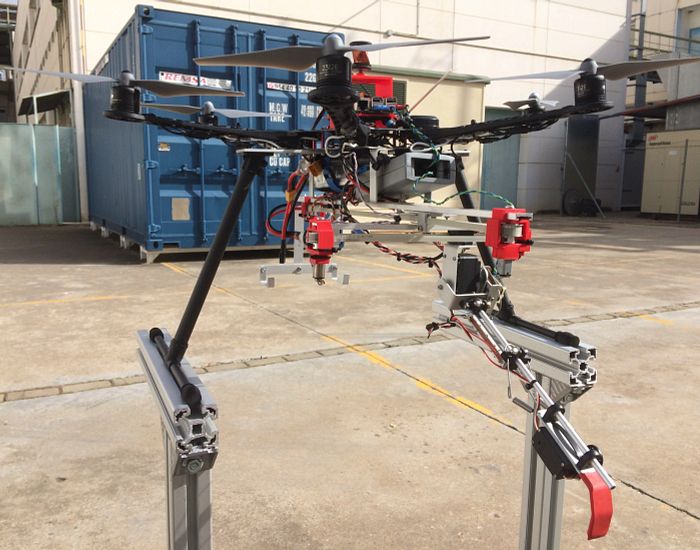 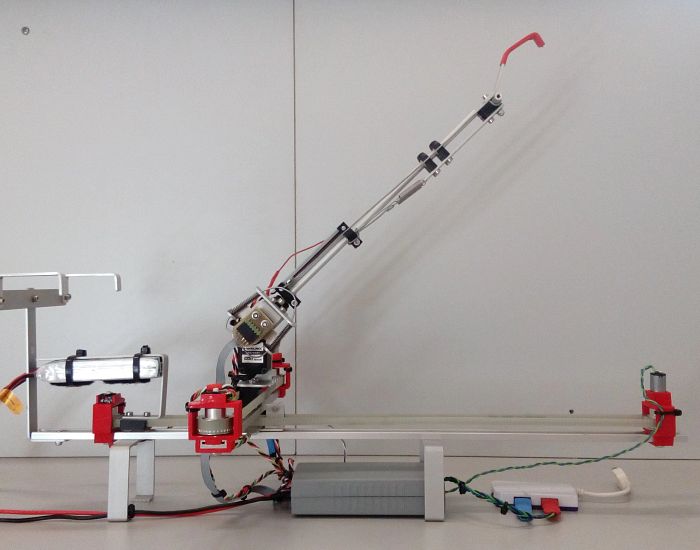 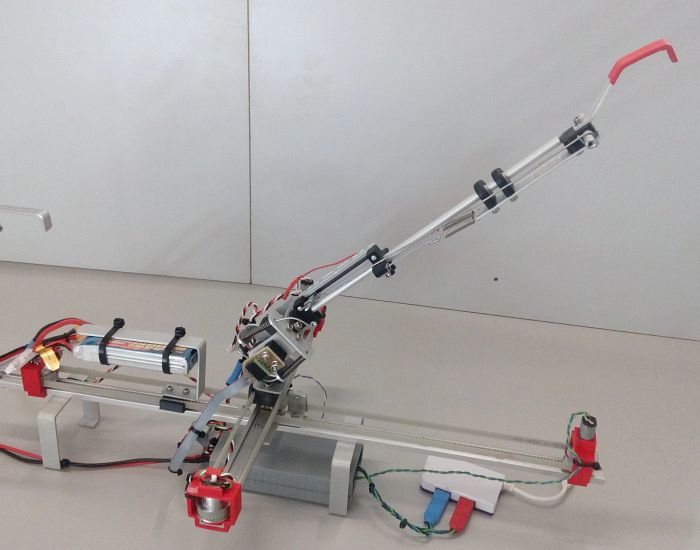 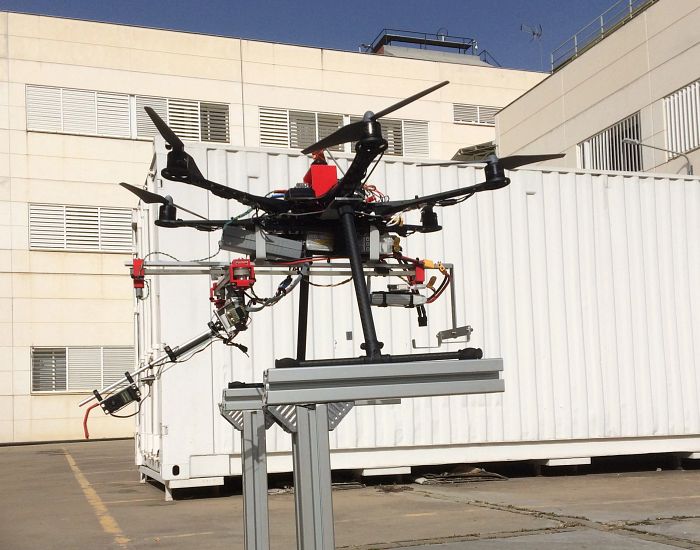 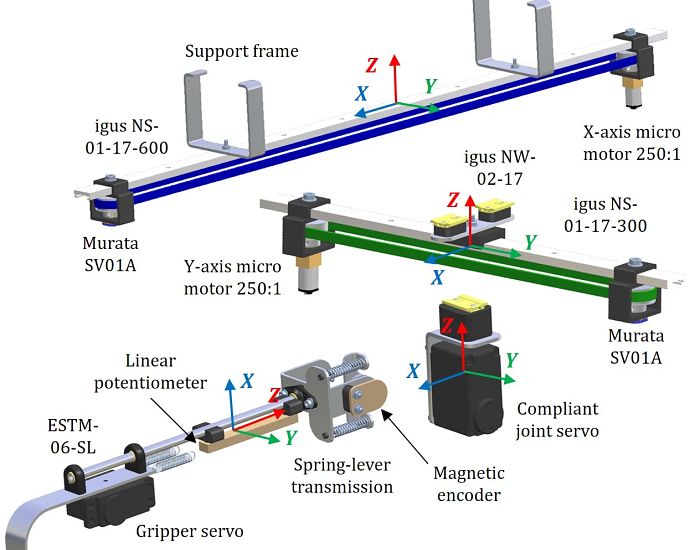 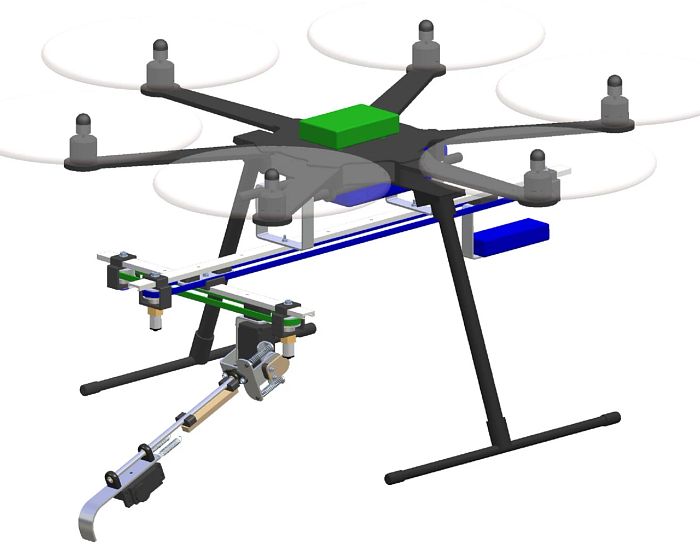 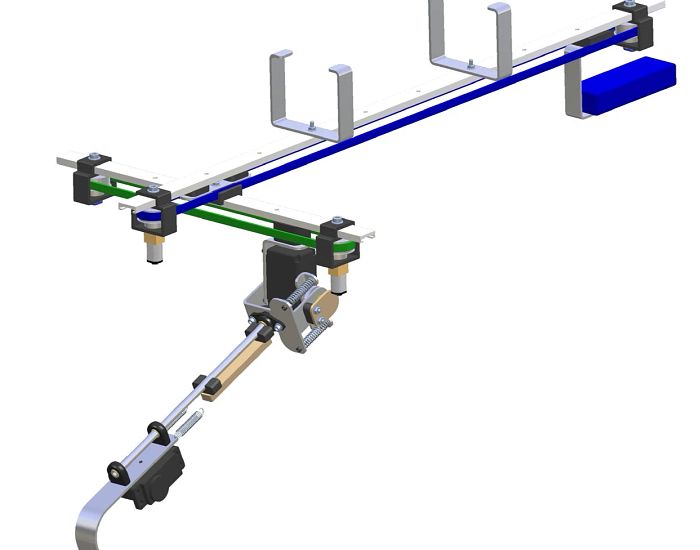